Congratulations Lisa on achieving an enormous goal of Challenge Roth.  Lisa conquered her quest in a time of 14hrs and 29m.  We loved getting the updates from Paddy and seeing all the pics roll through.  Now let’s get the real story from the super woman herself!

WARNING – LONG-WINDED RACE REPORT ALERT!! The short version: I swam, I rode, I ran, I fell, I finished. 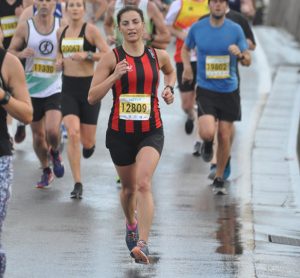 The Gold Coast Marathon festival took place over the weekend in the sunny sunshine state (!) and we had a few more than expected athletes racing with some taking a sneaky trip up north to get amongst all the fun!  Congratulations to all those who took part.  Shout out to Carly who completed the 10km and full 42km events (with a 10km time identical to her husband #couplesgoals), to Steve & Jen smashing out a half marathon in their build up to Thanyapura (and looks like Jen pipped you on the post, Steve!), to Neda who set a big goal of a new 21km PB and smashed it and to Mario who back up his recent efforts at Cairns with a very fast GC marathon!

Carly: Marathon number 18 in the books. Now give me all the food ? 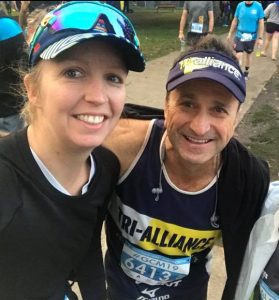 We were super excited to see long time friend and Tri-Alliance athlete Andrea Koderisch take to the start line of Ironman Frankfurt in his trusty TA kit #TAAbroard.  Unfortunately things did not go exactly to plan and made for a very eventful day!

Long version: It was what in German is called a “used day”, (I was about to write “a day to forget”, but that I won’t!) …
After a week in the high 30°s and a forecasted temperature of 39°C for the day the “non wetsuit swim” did not come as a surprise, I’m relatively faster with it, but ok.
Nice balmy water and rolling start got me off to a relaxed swim until the first turning buoy @750m where I sank about €400 of Garmin Fenix (which wasn’t protected by a wetsuit…) in Langener See. On the ways back I had major issues with the sun glare and lost a couple of minutes at least, trying to find first the Aussie exit and later the final the swim exit… 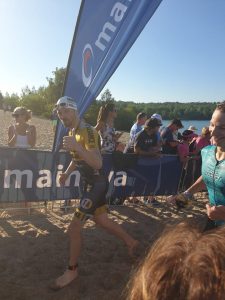 Through T1 I went calmly and was about to mount when someone yelled “Your front tire is flat”. Apparently they meant me. So off went the front wheel and on went the spare tube. About 7mins, I think (don’t know exactly, no watch, remember…?), hadn’t put on the front wheel well which lead to another 10 second stop a few km’s later.
Cycling went well sticking with my planned power and passing quite a bit more than being passed. Around km50 I had to pee badly, and as they had said in the briefing that peeing on the road side, if done discreetly, was acceptable, I did that. Apparently the official on the motor bike had a different understanding of discreetly than I: Red card for public urinating.

So I rode on considering to put in a complaint (with a probability of it being accepted of about zero) and decided to take it easy, enjoy the ride and just see how the day turns out.
I finished the 185k in under 5h30 including a changed tyre and a discussion with a race official…

The run turned out to be as horrible as expected. Kept to my planned 5min pace for the first 12k but then that started to deteriorate. As by now I was running “just for fun” anyways, I decided to play it safe and walked the aid station making sure to use any means possible to cool down. The marathon took me slightly over 4h in the end.
So, yeah. No result on the tracker. Hope of my Kona roll-down-moment blown away; what remains is the pride of having finished in these horrific conditions even after all the hurdles the day and myself had thrown in my way.
Now rest up. Rehydrate and plan the next race. Somewhere cold. Please.

The Surf Coast Trail Marathon is a trail running experience offering a solo or team marathon & half marathon along the stunning Surf Coast Walk.  The route snakes from Australia’s Mecca of surfing, Torquay, to the beachfront Fairhaven Surf Lifesaving Club on Victoria’s famed Surf Coast.  In the marathon, you can have a crack at the full distance solo, or knock off roughly half each in teams of two. Or try the half for a taster.  From iconic Bells Beach (yes you run a short stretch of this hallowed sand) to the clifftops of Point Addis and Anglesea and on to Split Point lighthouse at Airyes Inlet: this course has become renowned for the experience of journeying through a unique coastal landscapes. * 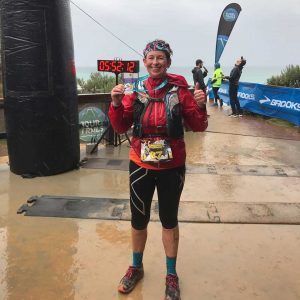 Michelle recently took on this event for the 3rd time in very wet conditions:

My third Surf Coast Trail Marathon done. Soaking wet from the close to non-stop rain, but no king tide this year so no swimming. Love this course ❤️#surfcoasttrailmarathon #trialliance

A wet Surf Coast Trail Marathon today. Anyone who wants to give trail running a try you’ve got to sign up for this – quite a bit of beach running, lots of trails, no roads, a few hills but not crazy hilly.

Enough said. . . It’s 7:20am on my morning off and I’ve already done a 75 minute Swim session with @trialliance because it makes me happy! . . In a few weeks time when I’m post hip op I’m going to need some serious inspiration! What things do you do that makes you happy?! . . #inspiration #inspo #dothingsthatmakeyouhappy #happy #swim #swimming #trialliance #triathlon #triathlontraining #physio #physiotherapy #preop #hipsurgery #hiprehab #rehabilitation #prehab