Let’s get to know a little more about Jordan Cook…

When did you join TA?

What made you give triathlon a go?

Completing a triathlon had always been on my bucket list but I didn’t really know where to start and I was working for Lakeside Sports Medicine Centre in the TA tent for 2XU Race 1 2018/19 and Michelle convinced me 10 weeks was long enough to train and complete my first one!

As most of you know I have had some injuries/surgeries since I joined TA and I love that because of the 3 disciplines there is always something I can do. I’m very goal orientated so I love that there is always at least 1 goal per discipline you can work on. I am also a huge people person, so I love that Triathlons and particularly TA attracts a really diverse set of people to talk to and swap and share stories with. 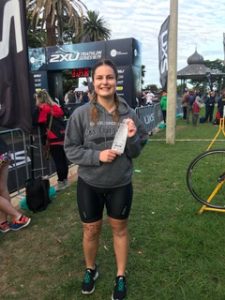 Have you been involved in other sports?

I played netball from the age of 6 to 23 before having multiple ankle surgeries and subsequently finishing up playing. I have always loved sport so naturally I’ve angled my work in that direction working with Rugby League, Cricket, Netball, Soccer and most recently AFLW.

Tell us about your family and where you call home.

I have a small tight knit family consisting of my Mum and Dad, my Sister, her husband and my super smart 18-month old nephew. They all live in Newcastle which is where I was born and spent most of my time growing up. Though I did live in Perth for 2 years and Melbourne for 5 years as a child.

I have been in Melbourne for nearly 5 years now and so it’s becoming my second home and I have no plans to leave at this stage. I am a huge believer of home is where the heart is so I don’t think I miss Newcastle as a place but because that’s where all of my family it is it will always be home. 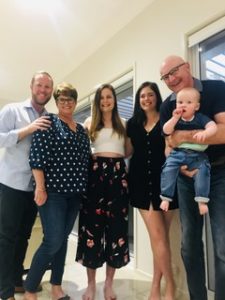 What made you want to become a physio?

I have had the longest list of injuries myself and when I was younger I just kinda thought to myself, hey wouldn’t it be cool if I could help people when this happens to them. I also LOVE sport and given my injuries couldn’t pursue a career as an athlete (let’s go with that was the only reason and not that I am way too short to play netball professionally) so I thought I could marry those too things together and work with sports and athletes to prevent and treat injuries and ultimately help them achieve their goals.

Do you have a career highlight so far?

I’ve had a couple of career highlights so far actually because I have been very fortunate to be involved in some cool sports and achievements but let’s pick my top 3.

3. Being the Physio for the Newcastle Knights U/16 team that went through the Harold Mathews (NSW youth rep season) competition undefeated and then travelled to Townsville to go to win the U/16 National Championship. It’s even more cool to see lots of those players now currently playing in the NRL.

2. Getting a last minute call up to work on some very experienced, Olympic Sailors when they were on a stopover in Melbourne as part of the Volvo Ocean Race, which if you don’t know is where they sail a yacht around the whole world.

1. Being the physio for the Melbourne Demons AFLW team. Firstly, getting the job (which is my dream job) and secondly going through a rough injury riddled season and going on to win the semi-final with 27 seconds to play. 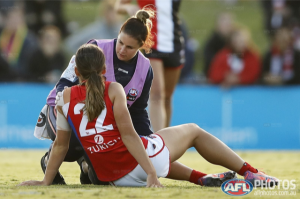 My ideal holiday is where there is sun, sand, history and great food. I quite like travelling solo but, in a group, so in 2018 I ticked all of those boxes and went on a top deck tour of the Greek islands. It was the perfect mix of history in Athens and then sunshine in Mykonos and Santorini with unbelievable food throughout. I mean I’ll go anywhere it is acceptable to eat feta cheese wrapped in filo pastry for lunch. Next on my list is Italy!

I am terrified of Ferris Wheels! I had never been afraid of heights or anything really until my best friend made me go on the Ferris Wheel at Disney Land in California and for anyone who hasn’t done it yet the “swinging” carriages do not gently sway they swing, aggressively. It was raining, the carriage was swinging so far that you could look directly in front of you and be seeing the ground below, I was death gripping the cage behind me whilst crying asking the operator to let me off. So now I avoid all ferris wheels.

What’s do you do when you’re not swimming, riding and running?

I am a bit of an exercise nut so I spend a lot of time in the gym working on my strength to manage my current injuries and prevent anything else cropping up. Otherwise I’m generally at work or hanging out with my friends, we love a good cheese and wine picnic in the park.

Tell us something that we don’t know about you!

I am quite the baker in my spare time. Anything from slices to cakes but my favourite thing to make is a baked cheesecake. Last year for my birthday I spent an entire day (yes the recipe took 10 hours) making a double layer dulche de leche, Malt baked cheesecake with a chocolate glaze.