Congrats to Michelle Grocock for stepping up to the line for the 70.3 IRONMAN World Championships in Nice, France, despite the less than ideal lead in. Unfortunately Michelle had to pull out of the race but we have been inspired by Michelle’s honesty and her strength in listening to her head when she probably just wanted to follow her heart!

It happens to us all. Some days are just not our day. It’s very rare this happens to me. It’s disappointing it happened in the World Champs.

DNF for me today. Very last wave start (which was worrying me a lot – there’s a 12:05pm cut off at the top of the climb on the bike, regardless which wave you started in, so clearly the later the wave, the quicker you’ve got to get through the swim and the first 36km of the bike leg – all climbing after the first 10km) then into the water for the swim.

The swim didn’t feel awful, but it didn’t feel good either. Way too hot in a wetsuit (why didn’t I learn from Texas; I took false comfort that 95% of people were in a 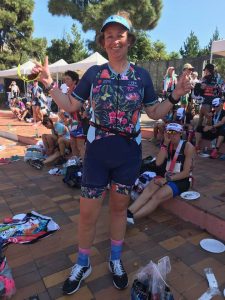 wetsuit), and I clearly hadn’t put it on well either as it felt really tight across the arms and shoulders and I was struggling to lengthen my stroke out front the whole way.

Got onto the bike (I think the last person they let thru before cut off), mentally put the swim behind me and determined to have a good bike leg. Had nice first 10km or so then turned a corner and hit a hill I don’t recall seeing when I drove the course (I think I went a different way). Only short (600m or so) but apparently 17% incline. I couldn’t climb it even in my easiest gear. And as it turned out the combination of slippery cleats and slippery road meant I couldn’t walk it either. At that point, my mind told me to give up. The body was feeling great (ironically the injury that had been worrying me all week was perfect at that point) but the mind was just tired.

Given I’m known for having really strong mental determination (tough cookie) you might ask what was different this time? I think I know. We all know leading into a big endurance race your mind needs to be 100% on its game. Relaxation and freeing up the mind of its daily worries is a huge part of that. How often do our coaches remind us in that week leading up to a race, it’s all about relaxing and getting the mind in the right space?

Whilst I’ve been on holiday for the last few weeks, and yes the photos have made it look awesome (which it most definitely has been), I’ve also had a string of bad luck over the last few weeks that I wouldn’t wish on anybody. Greg even asked me a few days ago if I had walked under a ladder, or stepped on a black cat or broken a mirror, it was becoming a joke.

Some I’ve posted here, some I haven’t bothered, but has included 3 separate injuries, a broken bike (thanks Air France), a broken bike bag (thanks Air France again) and a bunch of other stuff. Only yesterday I was dragging a 19kg new bike bag along the streets of Nice in the midday heat for 3km because the trams weren’t working. Not exactly the race lead in I would want for a World Champs. I could feel the stress accumulating over the last couple of days in particular, every little thing was winding me up, and was hoping I could shake it. But clearly not. I do see the irony in what I’ve just written here given one of my catchphrases is No Excuses. Hey, I’m human ?

So it’s time to just acknowledge that’s sometimes what life chucks at you, and there’s absolutely nothing you can do about it, to relax now with a few wines until I fly out on Monday (and there is another of the challenges I’ve been dealing with – thanks British Airways for striking and meaning I have to fly out of Nice a day

early, buy a new flight that costs 3 times as much and stay overnight at Heathrow to still get my international connection home), to have a laugh at the comedy of errors I’ve been dealing with, and reflect on the huge achievement of getting to the World Champs in the first place (I am so proud of myself for that, and it won’t be my last World Champs I am sure of that).

And then to reset and get ready for a fight (a fight, not a flight, well I guess a flight as well). Because that next race for me better look out, because I’m coming!

Now to go back to transition and hope my bike has arrived. Hopefully it’s not still driving around the bike course in a truck like it has been most of the day !

BTW this photo is of me at the finish. After tackling the French bureaucracy that is trying to get into the finishers tent in the reverse direction so I can pick up my bags. I did manage to snaffle a finisher t shirt off one of the tables before they spotted me too! Missed my chance at a towel though ?