Race Report brought to you by Ange:

A number of us headed down the road to Barwon Heads to compete in the 13TH BEACH HEALTH SERVICES KONDAK TRI, known as Victoria’s most picturesque Triathlon and I have to agree.  There was such a wonderful atmosphere and everyone was so friendly, running into our TA family members and other friends only adds to the enjoyment, the weather not so much….. The cold wind was a bit of a shock and had us questioning ourselves on the long walk down to the swim start.  Standing on the beach, it was difficult to understand that we would be swimming with the current when all we could see was the water flowing the other way on top, once we watched the first couple of waves head off we soon realised that it was the wind causing the confusion, a strong current gave everyone a helping hand and saved many a person’s legs for the bike.  Once everyone got out on the bikes the wind was noticeable straight away and a number of the 230 first timer triathletes really struggled.  Thanks to all of the different conditions we train in, we were able to handle the wind without too much hassle. After turning I noticed very quickly that there was an even stronger head wind heading back into Barwon Heads, even with that I was still able to take in and enjoy the scenery.  With great support from the crowd we headed out over the bridge on our run, which included 500m along the beach, the soft sand onto and off the beach was challenging on knees and ankles, everyone made it through unscathed and continued on through the surrounding scrubland.  Both the bike and run legs had a number of undulations which ensured you couldn’t get bored.  The sun came out for the race presentations, Tri Alliance was represented on the podium three times with the two members of the Burns family winning their age groups and Tegan being the second fastest female on course.  Slaine came just behind the fastest female, collecting another bronze this season.  It only took a short time post-race for us to decide that we definitely want to head back next year and achieve even greater results.  So, who’s going to join us?

Congratulations to our team:

The Rottnest Channel Swim is highly regarded worldwide and one of Western Australia’s iconic events.   The annual swim is held in February each year, whereby swimmers start against the backdrop of stunning Cottesloe beach at dawn and make their way across the Channel covering 19.7km of Indian Ocean to finish at Thompson Bay, Rottnest Island, making the Rottnest Channel Swim one of the largest open water swims in the world.  Whether competing as a solo, duo or team, the Rottnest Channel Swim is a ‘team’ event with all swimmers surrounded by a support network of paddlers, boat skipper and crew.  This year saw hundreds of swimmers abandoned the race after a 3-4m white shark was seen at the 12km mark. The Rottnest Channel Swim Association, in a statement, said the race was suspended for around 100 swimmers between the 11 to 13 kilometre marks, within one kilometre of the shark sighting, as a precaution.  Our very own Aaron took on this momentous event as part of a team and luckily avoided the excitement to finish is just under 7 hours.  “We made it!  Had to tread water for a bit until they cleared an area after the shark sighting.  I had to jump in and swim up to the exclusion zone after the confirmed sighting.  It was the scariest swim I have ever done!” Huge congratulations to you, Aaron!  What an amazing feat!

You may have seen our little Pocket Rocket around at sessions recently, and not only is she developing into one heck of a triathlete, Nichola is also competing in Life Saving Victoria’s Junior Carnival series.  LSV’s Sport department offers unique opportunities for life saving members/nippers to test their lifesaving skills across the state in a variety of settings.  Nichola competes in events that include Beach (flags, sprints and distance runs), Surf (Swim, Board, Ski, Iron and Surf Boat races), and Pool Competition.  Nichola competed in 2 events at the junior qualifying carnival at Lorne Surf Life Saving Club over the weekend – iron and board rescue.  She has already qualified for the State Champs in these events, so the weekend was used to hone her skills and refine technique.  We’re wishing her all the best of luck in the State Championships held in Warrnambool on March 10-11. 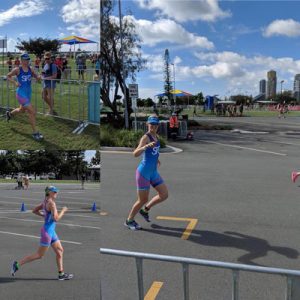 As the world sprint qualifiers wrap up, I reflect back on late 2017, when Hobart seemed like a place not many people knew about (see also: Canberra), and the Gold Coast evoked thoughts of gentle sea breezes and pristine white sands. Reality, however, rejected my preconceived ideas of the Gold Coast and substituted instead a weekend at 33 degrees and the annual rainfall of Ballarat. On arrival, the plane needed a few attempts before landing safely. Giddy from almost an entire tub of Rescue Remed

y pastilles, we made the trek to our modest motel before joining the longest registration queue in the World. Late on race day eve, organisers sent out the expected ‘no swim’ notification, which was closely followed by the FB rants we all expect and know and have come to love. On race day, I didn’t perform a warm-up as it was over 30 degrees and I had already reached my max HR the day prior during plane landing saga. We began the race with a rolling run start, a concept which many athletes found perplexing. The bike course was congested but flat and smooth. Each lap brought with it the faint waft of Subway and McDonalds. Then we ran again. Despite good times for me, a large swarm of people with faster times finished prior to me. Immediately afterwards, I sat in what I though was a recovery tent and poured what I thought was water all over myself; results varied. Now we wait for TA to tally up points and make serious announcements. Maybe I’ll find myself back on the GC later this year.’ 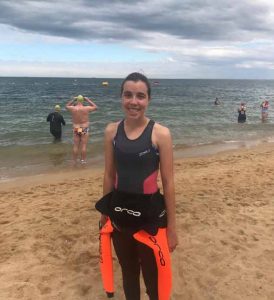 The Brighton Bathing Box Classic at Dendy Beach, Brighton VIC, was organised by Brighton SLSC and offered 1.2km & 2.5km ocean swims in around the buoys course formats. The Bathing Box Classic had been postponed from the start of December, due to heavy rains in the days before.  As it turned out, it moved from being the first swim of the Great Victorian Swim Series to the last swim (unfortunately due to wild weather developing after waiting for large vessels to clear the channel, yesterday’s Jalna Big Bay Swim was cancelled).  And in spite of challenges (swarms of jelly fish, strong winds, rain) Brighton Life Saving Club put on a great event. Well done to Chloe for not letting Thursday night’s jellyfish invasion of Elwood put her off swimming, completing the 1.2km swim in 20:22 mins. 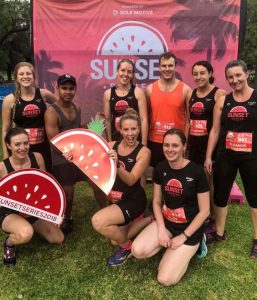 Race #2 of the Sunset Series headed to Princess Park last week, in much cooler conditions to the race at the Zoo!  Roisin took on the event with her group of “Drug Runners”, getting through the 8kms in 40:57.  We’re loving the watermelons this year! #ShowUsYourWatermelons

There is a reason why I love #triatlon #training at #elwood with @trialliance. This is one of them. #trialliance #buildtoolympic